Camtasia 9 has been my go-to video creation software for a few months now, I was using Adobe Premiere Pro CC but that has a higher learning curve and for someone who only creates the occasional video, it makes sense to use Camtasia to start with.

Having said that, I noticed an issue with Camtasia that I had not noticed since I started using it.  All of my previous videos were made up of video footage and a music file, pretty straightforward.

I noticed the Camtasia audio problem with speech files and not the usual music tracks.  I had a voiceover file made and was given the file in MP3 format, never had an issue before and did not envisage any issues.

Upon importing the file into Camtasia and splitting the voice file as required, I noticed the issue during playback.  Some parts of the track would be skipped and some parts would be repeated.  I tried deleting and re-adding the audio clips and tried to export again and I still had issues.

I searched for the solution and found that this is a common or known issue with Camtasia, since Camtasia 8.  There is no official fix as Techsmith state that Camtasia works best with WAV files encoded to 44100 Hz 16-bit stereo.  My files were encoded to MP3 22050 Hz and this was causing the issue.

The solution requires the original audio file being converted using software such as Audacity which is available free here. 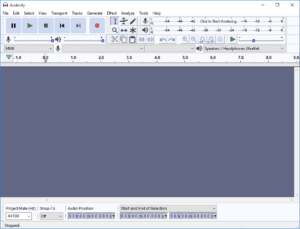 Then simply export as WAV file Then use the new WAV file and you will find that the audio is working as it should.

This is not an ideal fix to Camtasia’s audio issue but is a simple workaround and the solution doesn’t cost anything.

I had an issue with my Apple iPhone 6 Plus not syncing with my Windows 10 PC, I was trying to backup my phone but it would not sync in Itunes.  The phone was recognised by the PC as I was able to access the DCIM photos folder. I tried uninstalling and reinstalling Itunes and rebooting…

HP L7780 All in One was not printing, I had to download the HP Dr tool which “repaired” the printer queue which then allowed me to print.  This solution seems to work: FYI- I’m using my L7780 via a wifi connection using WPA2 security and a static IP and network RAW printing to port 9100. …

I have 2 64gb Micro SD class 10 cards that I use for my Vantrue X2 car dvr , one is a SanDisk Ultra 64GB  and the other is Kingston 64 GB.  After experiencing some issues with the camera not recognising the speed of the card, the manufacturer suggested formatting the cards to FAT32 with the…

Having just purchased the Panasonic Lumix TZ100 compact camera I am initially impressed with the camera.  A few things I found disappointing, one I can fix with a simple bypass. The initial default framerate is set to 25 and 50fps not 30 and 60fps.  Also, the max record time in 4K is only 15mins, this…

I just bought a shiny new Asus MG28UQ 4k 28″ monitor, set it all up, tried to install the Asus DisplayWidget V1.1 from the supplied CD and it didn’t work after installation.  I had a look online and found the link to the file, downloaded what I thought was the new version and still no…

My 6 month old Dell XPS8700 has been restarting regularly and I couldn’t figure out why, checking Windows Events I saw it was always the same error Critical – Kernel-Power and Event ID 41 and Task 63. Upon researching this it seemed likely that the power supply was faulty, my surge protector was faulty or…